Go Directly To Rewards
Welcome to the PledgeManager for Lord Winklebottom Investigates - Murder! Mystery! Giraffes!!
If you missed our campaign, don't dismay! Just choose an option below.

It’s the 1920s and the world’s foremost detective is about to embark on his most challenging case yet. A mysterious invitation to an isolated island results in a grizzly murder and a race against time to track down the killer. Thankfully, in this world that’s not quite like our own, there’s nobody better to crack the case than the great detective and gentleman giraffe, Lord Winklebottom.

Join Lord Winklebottom and his steadfast companion Dr Frumple as they investigate the murder of their old friend. Uncover clues, interview suspects and solve puzzles to crack the case, capture the killer and uncover the horrifying dark secret at the heart of the Isle of Barghest!

Download the demo (available on Windows, macOS and Linux) to get a taste of the game. This teaser contains unique content that won't appear in the final game, so no need to worry about spoilers!

The final game will feature improved voice acting, animation and audio. If you need any hints or help, get in touch via #help on our Discord.

Lord Winklebottom Investigates is a game set in a version of the 1920s entirely populated by animals. Inspired by the likes of Agatha Christie and Sherlock Holmes, the game is a classic murder mystery with a bizarre twist.

Invited to the desolate Isle of Barghest by his childhood friend, Admiral Gilfrey, Lord Winklebottom arrives to find that Gilfrey is dead! The family maid, Beryl, made the gruesome discovery while undertaking her daily duties.

Suspecting foul play and trapped on the island by a storm, Winklebottom must investigate the murder, interrogate the suspects and get to the bottom of the many strange things going on on the island.

The game will challenge the player to solve the murder of Lord Winklebottom’s childhood friend, Admiral Gilfrey, in a case that will offer many hours of exploration, investigation, puzzle-solving and interrogation.

The game has a streamlined interface that allows you to directly interact with items in the world using simple, context sensitive icons. Just click on an object, and the options available to you will pop up:

Like all good adventure game protagonists, Lord Winklebottom has mysteriously large pockets that allow him to carry around a slightly implausible number of items at any given time. You can interact with stuff in your inventory using the same icon-based interface, and also drag and drop items to combine them or use them on other things in the game.

Stick your neck where it’s not wanted and question the other guests and residents of the island to search for potential suspects!

Explore outside the mansion deep into the island to uncover the strange secrets that reside there.

The game will be released on Windows, macOS and Linux in April 2020.

Lord Winklebottom will also be able to join you on your travels! As I am a registered Nintendo Switch developer a Nintendo Switch version will be released in June 2020 to allow time for additional Nintendo QA processes.

Any backers that receive the game will have the choice of any of the above platforms!

As well as the original English text and voice acting, the demo is now also available with German, French, Italian, Spanish, Russian and Japanese text translations!

Helping with the translations are Warlocs, a collective of independent translators comprising of many talented people with years of experience behind them.

The world of Lord Winklebottom is inspired by the detective works of Christie and Conan Doyle, but also draws on the atmosphere and tone of classic horror movies such as the Universal Monsters and Hammer Horror series.

In addition, Grim Fandango's combination of a compelling story and incredible atmosphere with great characters and strong humour is a big influence on the game.

Combining all these elements makes for a unique point and click adventure, filled with humour, mystery and some good old fashioned horror!

To show our heartfelt appreciation we are offering a fantastic selection of rewards for all ‘Winklebackers’...

A very big thank you! This pack includes access to our backer-only Discord channel, a special backer role on Discord, background wallpapers for both desktop and mobile, as well as your name being in the credits of the game to show our appreciation!

A digital copy of Lord Winklebottom Investigates upon release on your choice of Windows, macOS, Linux or Switch!

As well as the digital release, boxed copies of the game are available for Windows, macOS and Linux users! These will also come with a manual packed full of background information and clues!

You can also get your hands on a retro style big box edition!

Digital copy of the original roaring 20’s inspired soundtrack composed specially for the game! So get your dancing shoes on and get ready to Charleston with your fellow mammals!

A specially designed Lord Winklebottom bookmark exclusive to our backers, so you’ll never lose your place in your murder mystery novels!

Special edition, exclusive pin badge! Featuring the gentleman giraffe himself in all his glory! Pin it to your lapel, bag, or anything you can pin it to and add an instant touch of class!

An exclusive t-shirt, ensuring you look dapper all year around! Backers will decide on the final design! (final design and color will be decided by a poll amongst our backers).

Play a hand (or a hoof) with a set of stylish custom Lord Winklebottom playing cards! Each suit will feature custom character designs specifically created for this exclusive deck. Be the envy of your friends next game night with the classiest deck of cards to ever grace the table!

Have your favorite animal, pet or yourself as an animal in-game, to be featured in a book, newspaper or portrait that you can find while exploring the game world! You also have the chance to name your character! (as long as it is not offensive and fits in with the theming of the game).

The ultimate reward! Have your favourite animal, pet or yourself as an animal as a suspect! Lord Winklebottom will be able to interrogate them and they will feature as a major character! You also have the chance to name your character! (as long as it is not offensive and fits in with the theming of the game).

By backing one of our higher tiers you will receive a special mention in the game credits to show our heartfelt appreciation!

Some of our rewards are available as add-ons.

If you are already backing at a tier that already includes physical items, add-ons will not require additional shipping cost.

The extra digital game key (Steam/DRM-Free/Switch) is only available to backers of the £10 tier and above.

Lord Winklebottom Investigates is being developed by Cave Monsters, a 1-person game company based in Sheffield in the UK founded by Charlotte Sutherland.

I've worked in the games industry as an animator for around a decade, at a variety of companies including Rare, Tt Games, EA and Sumo Digital. This gave me the chance to work on a number of AAA games such as Little Big Planet 3, Sonic & All-Stars Racing Transformed and the LEGO games.

I've always loved adventure games,the first adventure game I ever played was The Curse of Monkey Island (the puzzle with the map tattoo wins best adventure game puzzle ever in my opinion!) and I’ve been a massive Lucas Arts fan ever since. Grim Fandango also holds a big place in my heart as I have a fairly dark sense of humour and I’ve incorporated my love of it into my personal life…

In 2011 was thrilled to get the chance to work as an animator on the Doctor Who: The Gunpowder Plot for the BBC. Having had this taste of making adventure games, I knew I wanted to make one for my first big solo project.

I'm a big animal lover and have always been fascinated by both animal biology, anatomy and not forgetting their cuteness!

I also love detective stories, particularly ones set in the late 19th and early 20th centuries, such as Sherlock Holmes (The Hound of Baskervilles has been a major influence!), Agatha Christie (And Then There Were None is another major influence!) and the Paul Temple mysteries.

So the naturally, this all developed into the idea of a giraffe detective from the 1920s named Lord Winklebottom!

The development cycle for the full game will be around 14 months. I already have a lot of the initial work done, in order to make the prototype demo that you can check out at the top of this page. There’s a lot of content needed to go from that to a full size adventure game, however.

The core of the game is its puzzles, so the development process will focus on these first. The plan is to rough out or wireframe the entire game - every location, character and puzzle - to produce a complete playable version of the finished product, but without final art or dialogue. This allows for quick iteration and testing of the puzzles. Once I’m completely happy with this, work will begin on production quality art, and making finishing touches to the final script ready for voice recording.

The artwork is entirely hand-painted in Clip Studio Paint and the animation is created using Spine, which allows for quick rigging of 2D characters and speeds up the process immensely compared to traditional 2D animation and, in turn, helps speed up the entire development process.

Rigging and animation in Spine

I have outlined some key dates below, followed by a pie chart with a revenue split so you can get an idea on where the money is going. 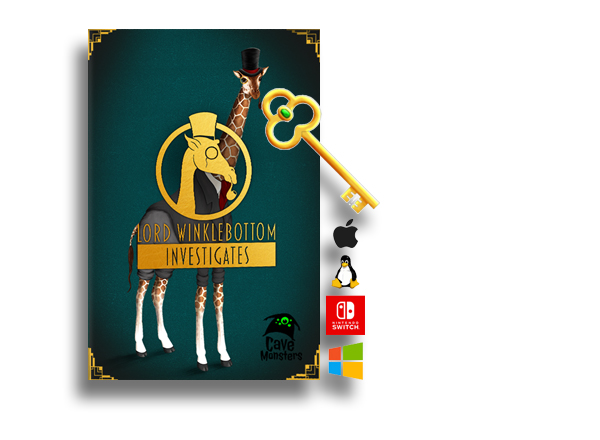 Get a copy of the game on release and our digital thanks pack, including wallpapers, discord role and your name in the credits! 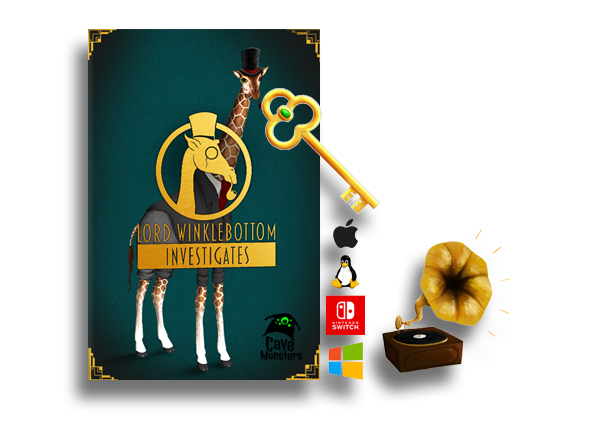 Receive a copy of the original 1920s inspired soundtrack as well as a everything from the 221b Backer Street tier. 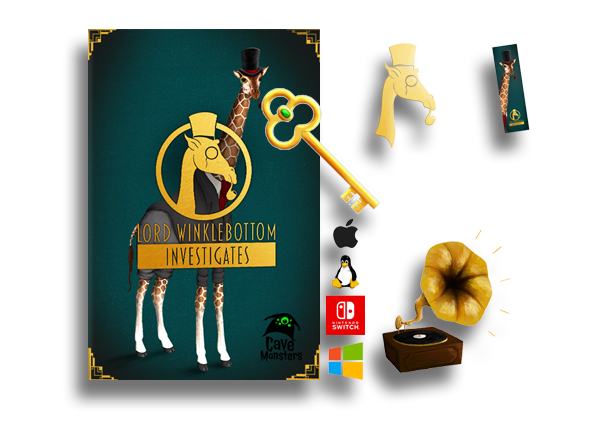 Show off your appreciation with a limited edition Lord Winklebottom pin badge and an exclusive bookmark for your murder mystery novels! 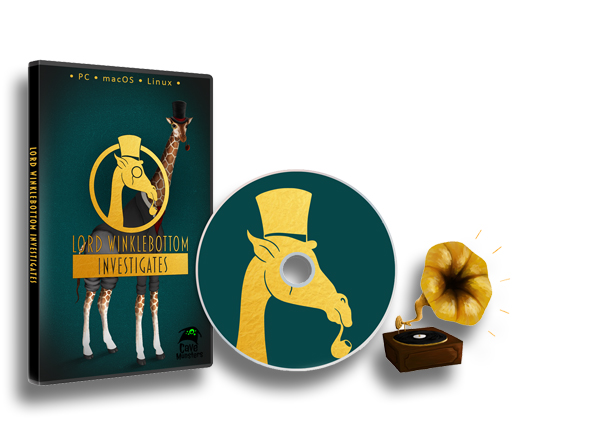 Get your paws on a splendid physical copy of the game for Windows, Linux and macOS! You'll also get a digital key (Steam/DRM-free) for the same platforms. 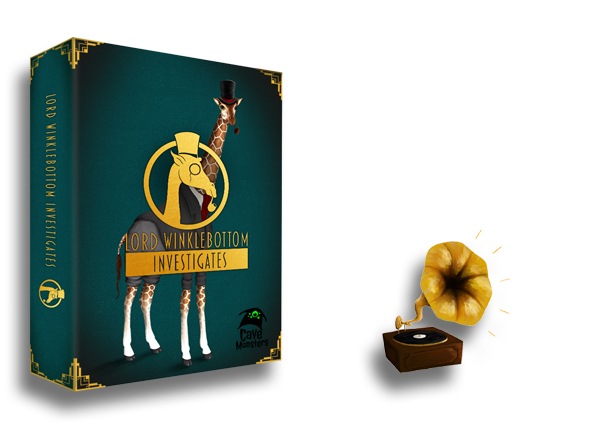 Relive the glory days of PC adventures with this authentic 90's style big box physical edition of the game for Windows, Linux and macOS! You'll also get a digital key (Steam/DRM-free) for the same platforms. 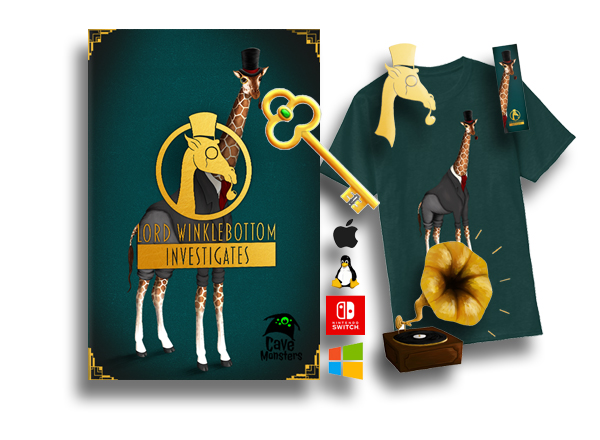 Ensure you look dapper every day (although we do recommend washing occasionally) with and exclusive Kickstarter Lord Winklebottom t-shirt! 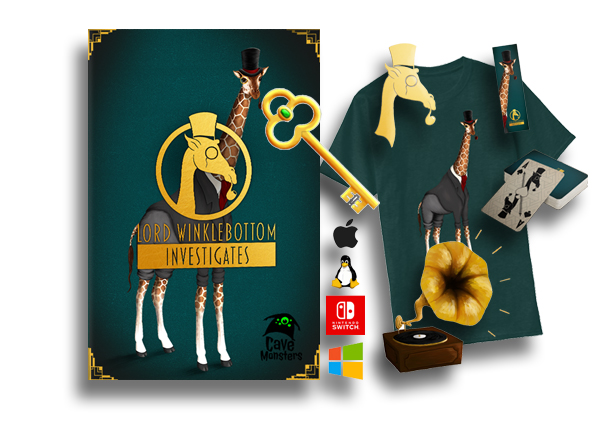 Play a hand (or a hoof) with a set of stylish custom Lord Winklebottom playing cards! Each suit of will feature custom character designs specifically created for this exclusive deck. 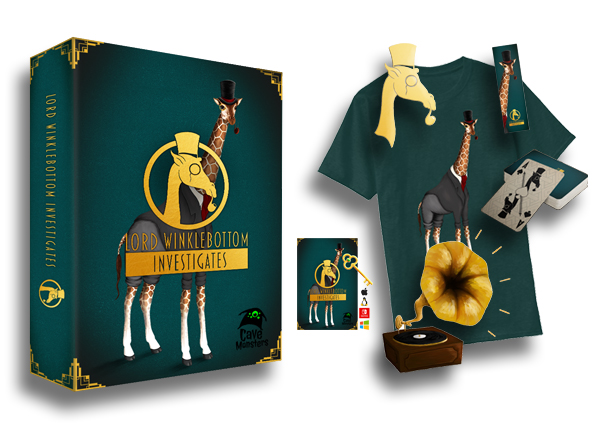 Indulge yourself with all the digital and physical delights on offer! (Digital version will be PC or macOS). 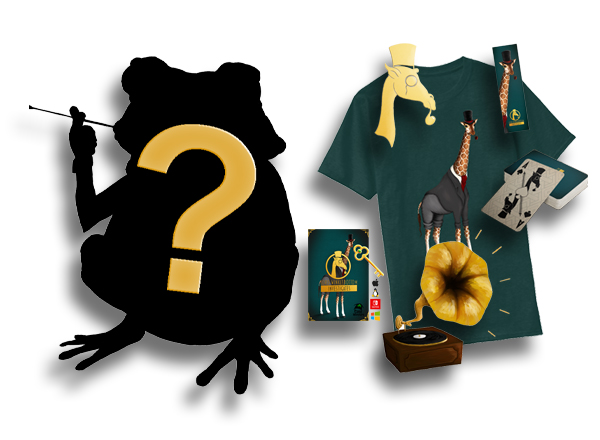 Have your favourite animal / pet in-game in a book, newspaper or portrait that you can find while exploring the game! You also have the chance to name your character! (as long as it is not offensive and fits in with the theming of the game) and receive a special mention in the credits! 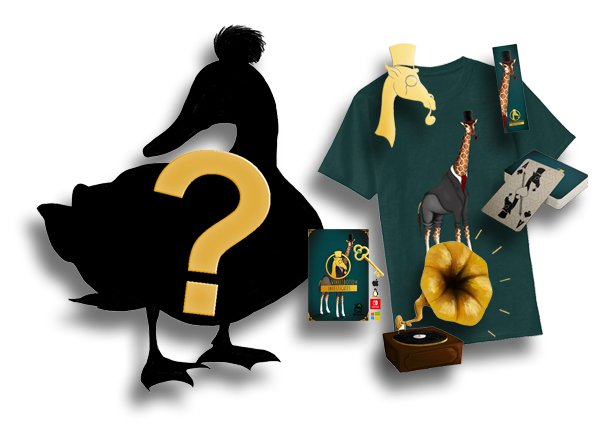 The ultimate reward… have your pet or favourite animal as a suspect in the game! They will be an important interactable character, able to be interrogated by Winklebottom himself! You also have the chance to name your character (as long as it is not offensive and fits in with the theming of the game) and receive a special mention in the credits, as well as an exclusive handwritten thank you postcard from Cave Monsters!

One last step to go!

Share your email, we will send you an invite!

If you're already have a PledgeManager account from another project, just sign in using the button below to join the project.

Complete your information below and we will send you an email to get started!